Bespoke - The making of a Savile Row coat - Part 13

Finished the side pockets (cross pockets) 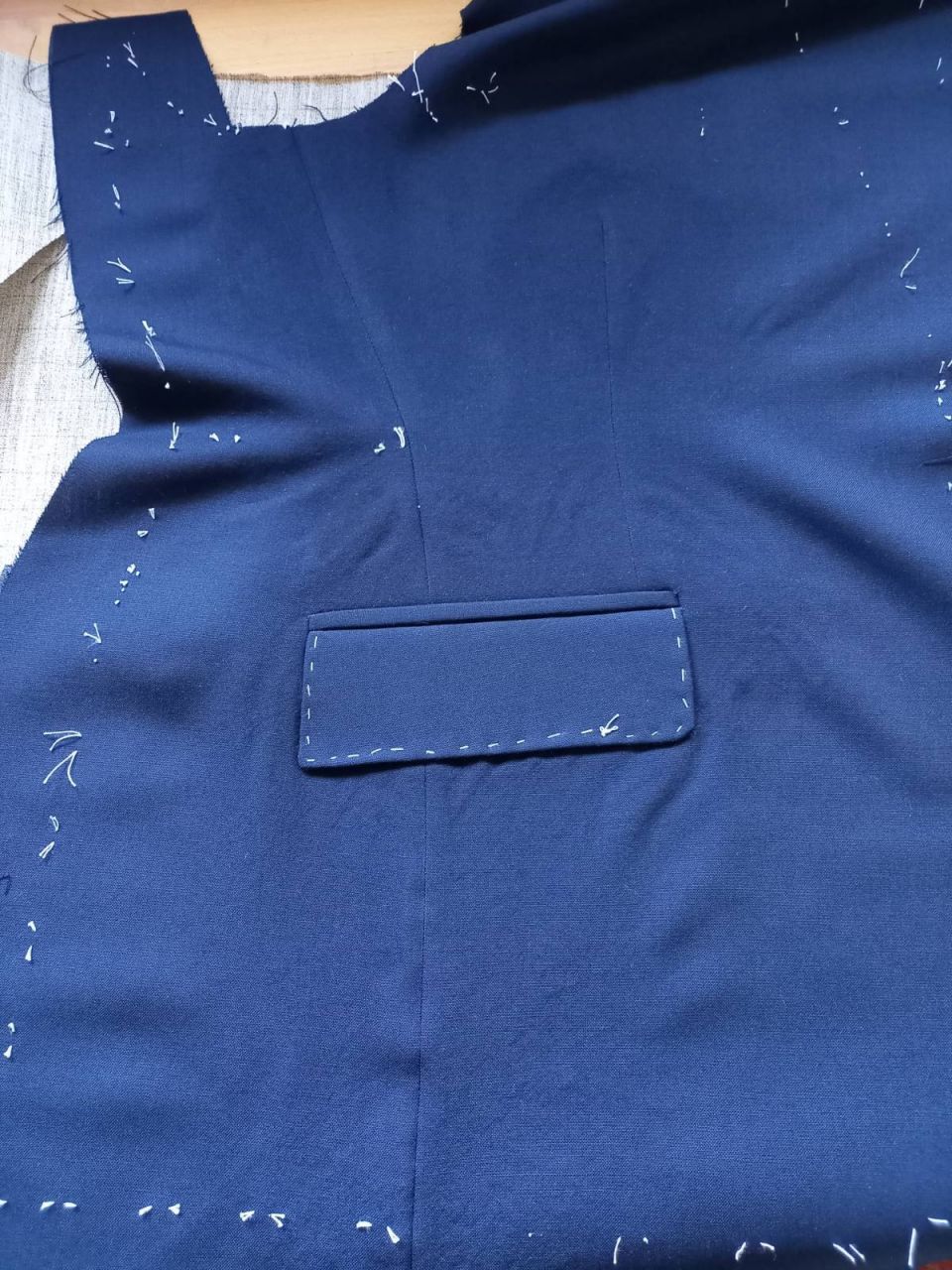 The outside - the white stitches will be removed later on! 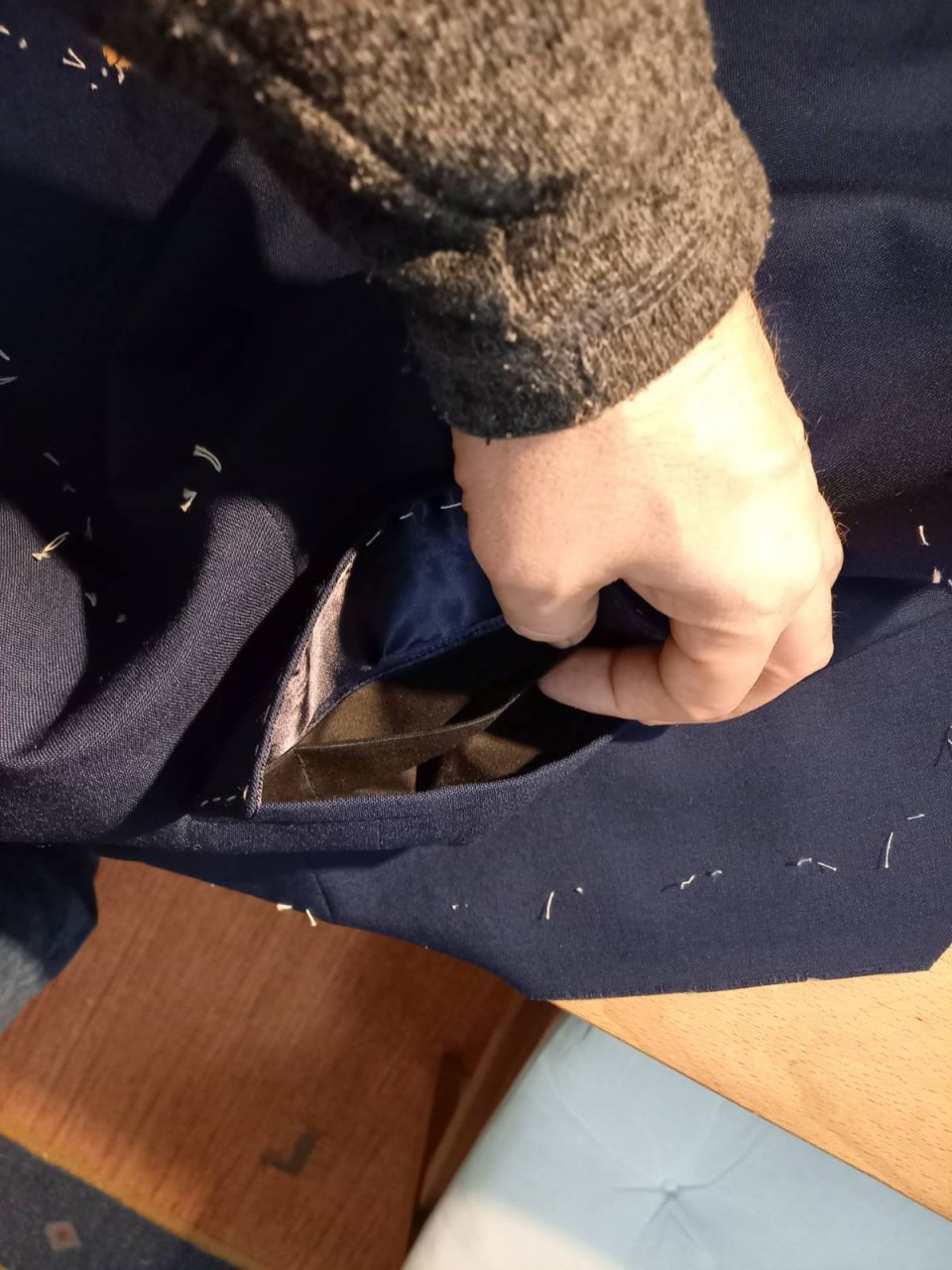 If you look closely, you can see the small pocket within the pocket. 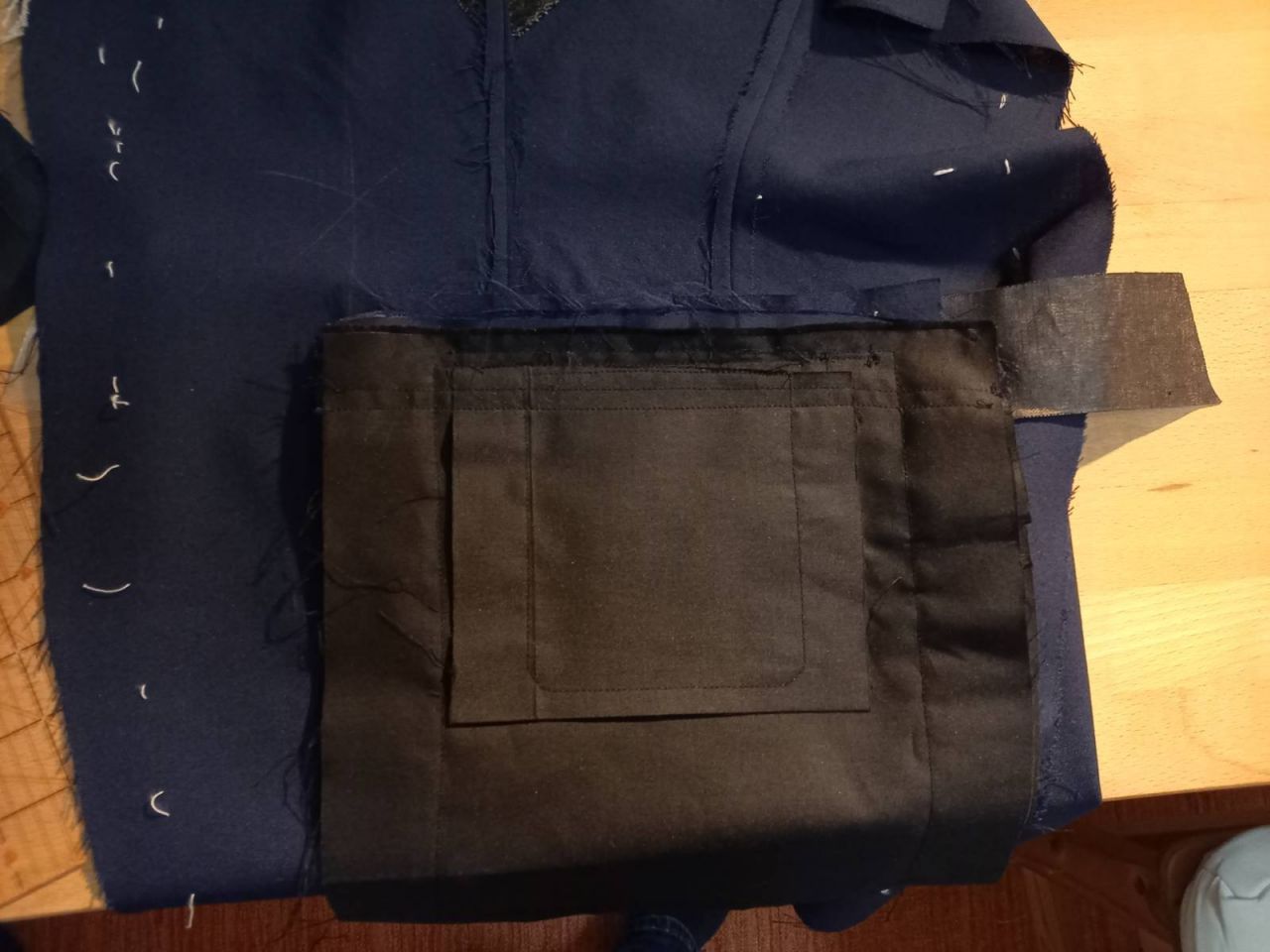 On top you see the outline of the ticket pocket. 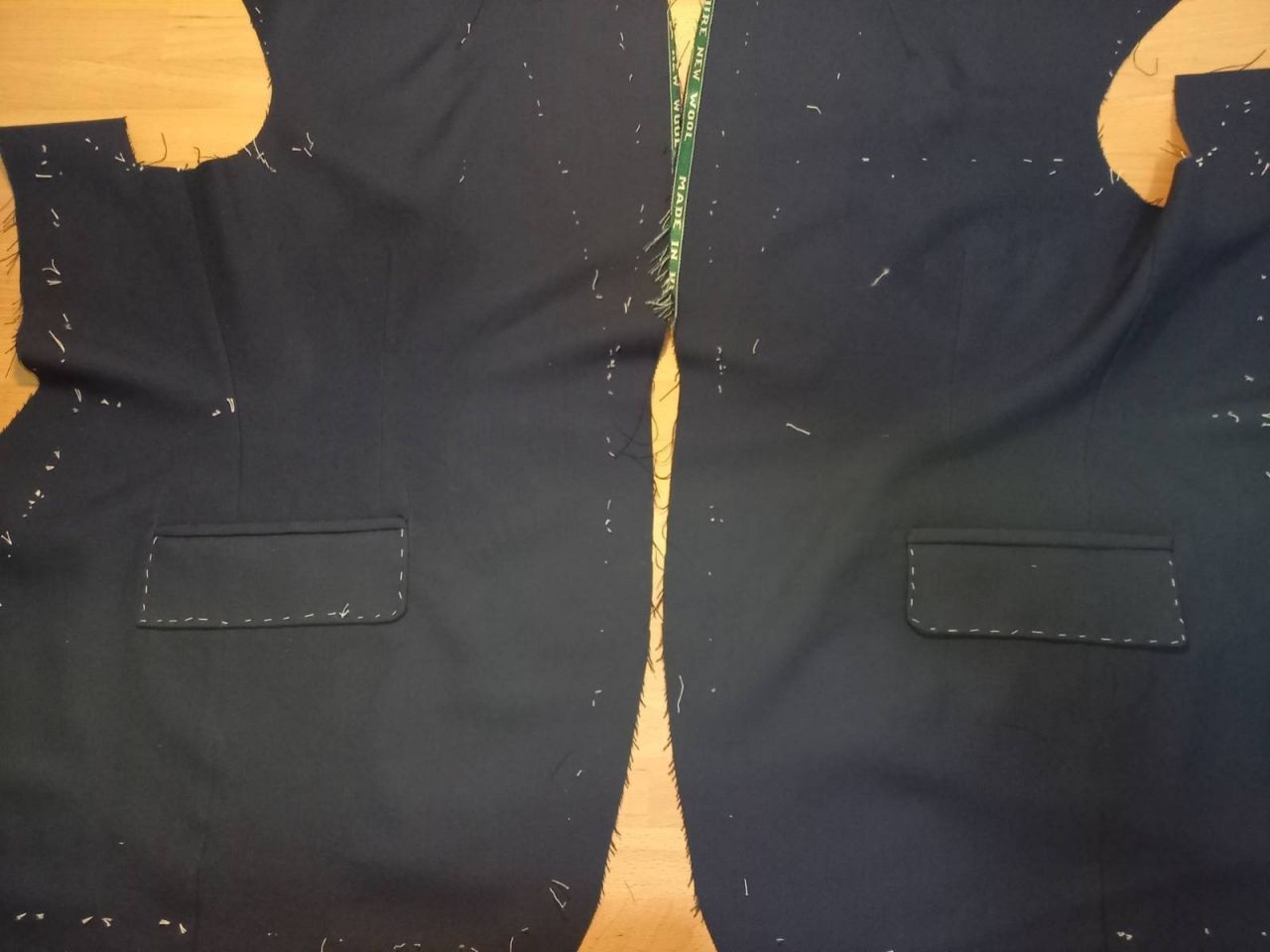 And there you have'em: Both fore parts with their cross pockets! Apart from the ticket pocket, some other details: - The flap can be put inside the pocket. The inside is broad enough and slightly slanted on the back side, so the flap will fit inside without having to wrinkle it - The corners are all rounded, to avoid collecting lint in the corners - The front of the pocket insides have an additional, horizontal, pleat in them. So if you'd put something bulky inside those pockets, the pleat would open up!

Bespoke - The making of a Savile Row coat - Part 12

Note to self: When the iron is on, it tends to be hot. Not just warm. Hot. Keep your fingers away from it.

*Rory mentioned on our forum, that it should be "double jetted (IRL / UK) or double welt (US) pockets. No clue, why I started rambling about "welted" pockets...

Today I received my new body canvas, so I cut the fore part pieces again - they have soaked an hour and are now hanging out to dry. I will not be working with them for the next few days, as I am working on the pockets.

The coat will be having two big side pockets, with flaps, and - of course - an outbreast pocket. You know, for the "squares", which you can fold nicely and have them dangling out of your outbreast pocket.

First, the forepart has to be prepared: - Some fusible interfacing, to make the edges stronger and prevent them from tearing out. - Then some linen strips (called "holland" - quite disturbing for me...), also to make sure those pockets will be stable and robust. 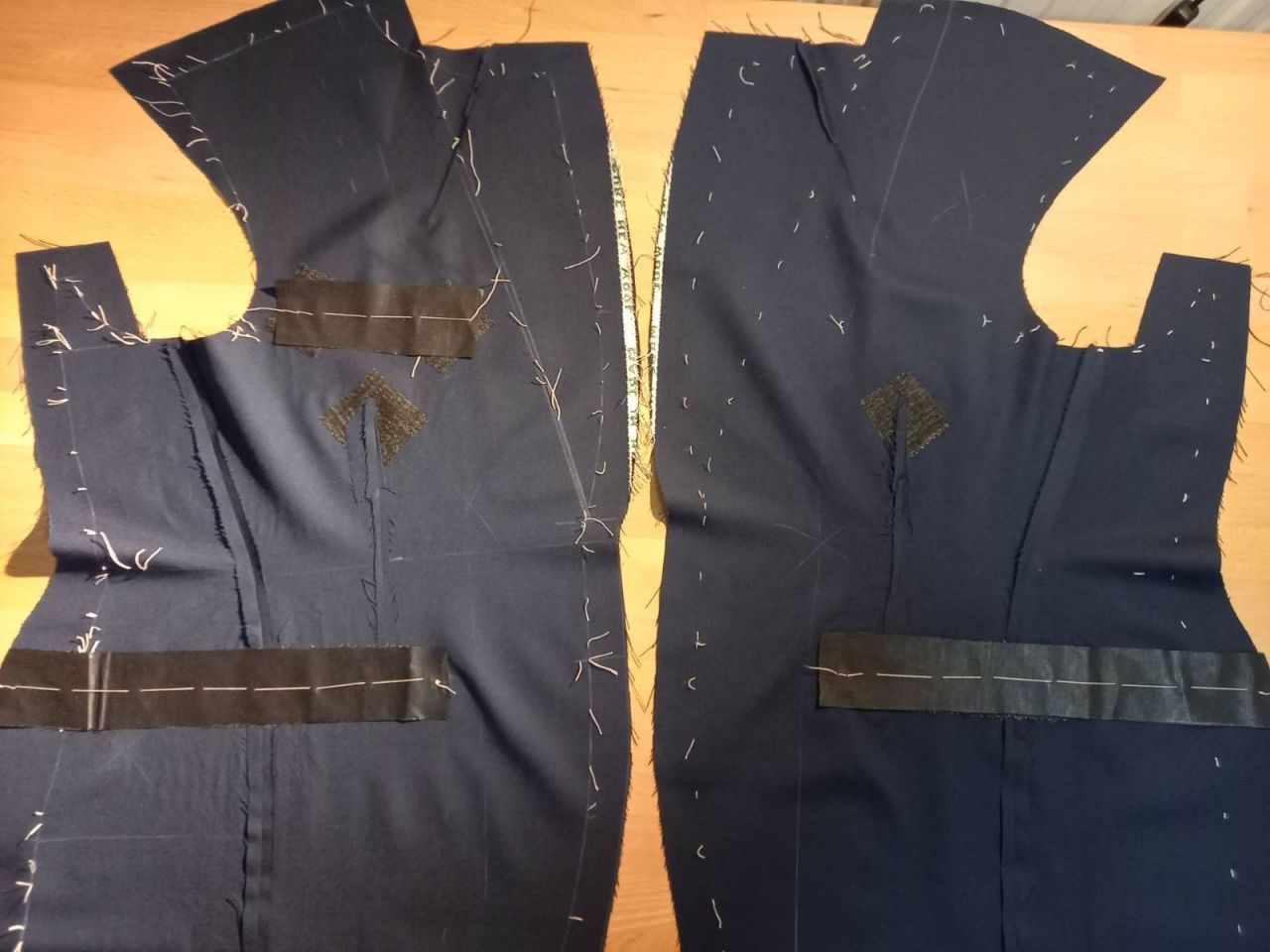 Then the flaps were made, out of the outer cloth (of course...), the same lining as the inside of the coat - and in between another piece of "silesia" (a rather sturdy cotton), to "give them some weight".

Apropos "weight": So far, all pieces together weigh around 850 grams! 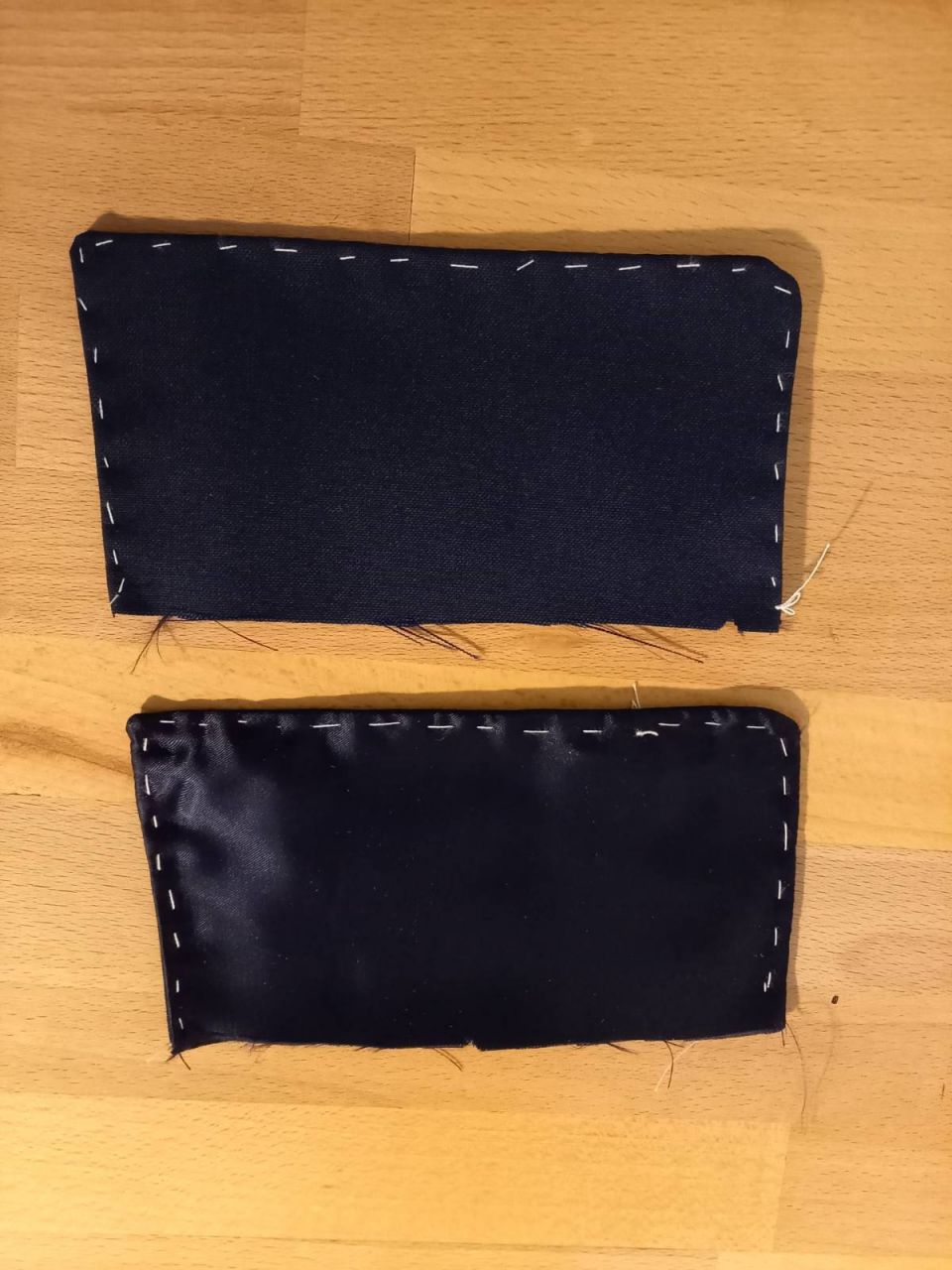 Then the welts had to be constructed. I did that before, so there were only some details Rory does differently - and probably better. Still: These are not the best welts I made so far. 7 out of 10, I'd say. They have not been sewn completely, so they might become better - or worse. 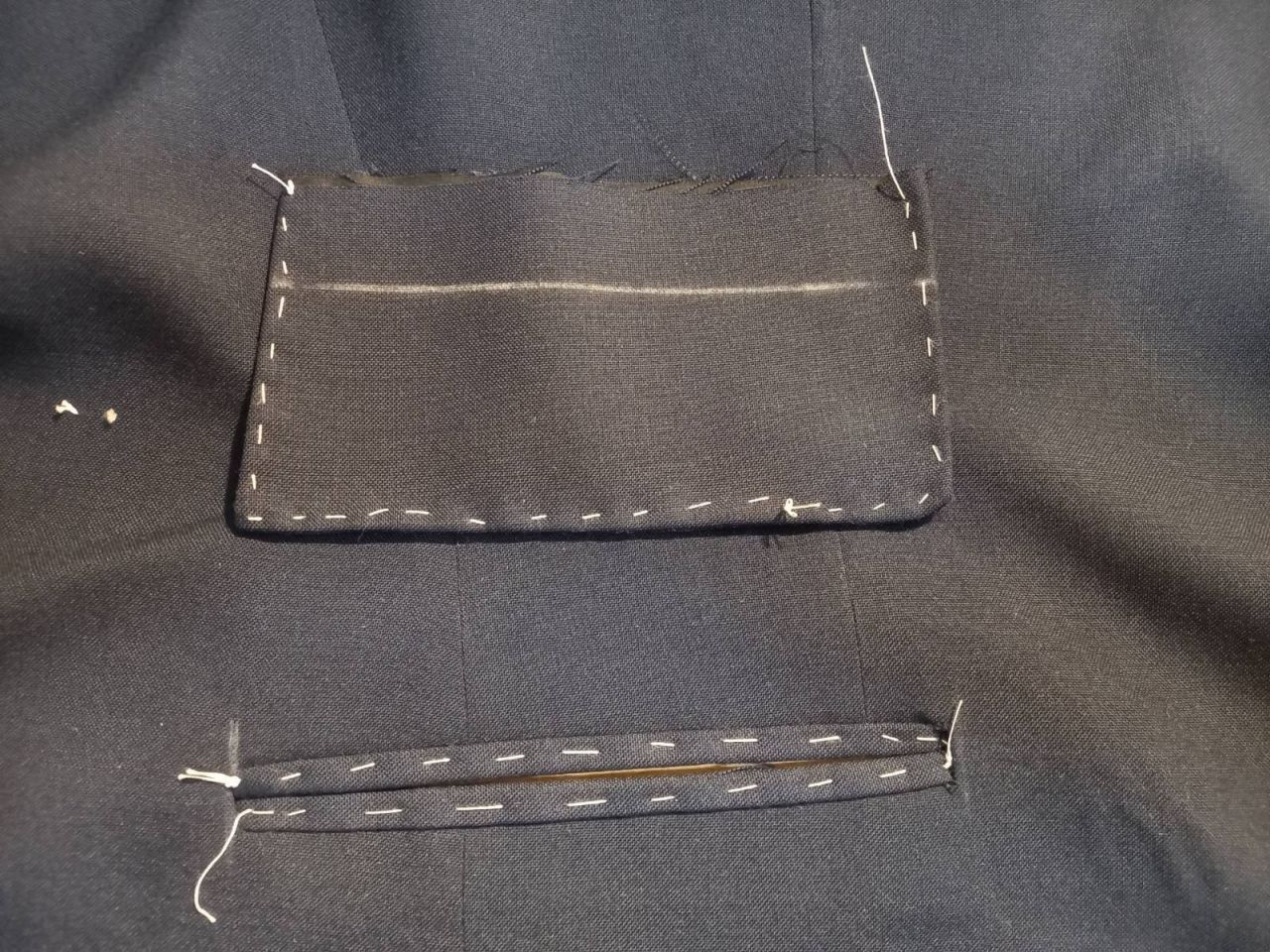 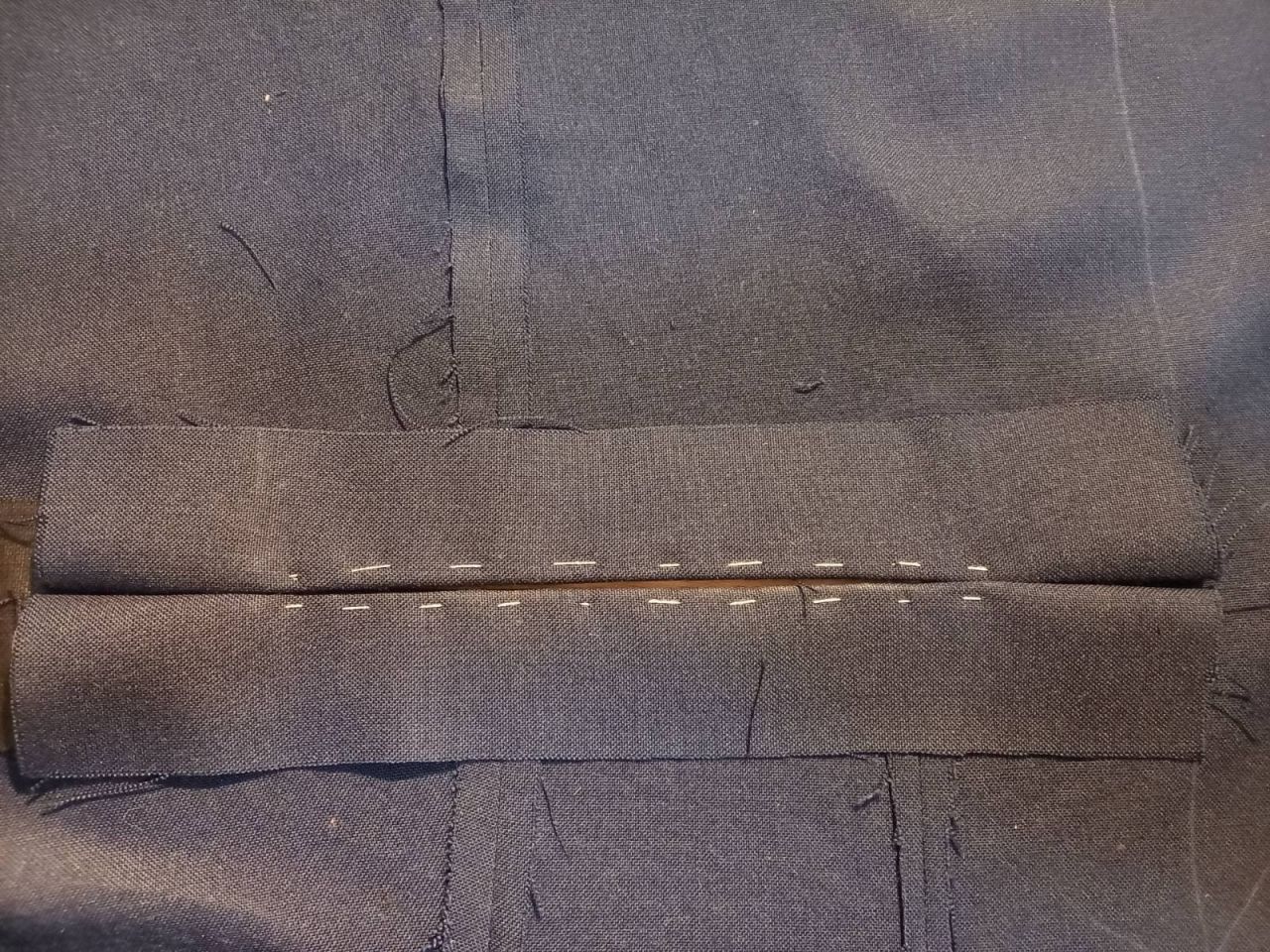 Bespoke - The making of a Savile Row coat - Part 11

Lo and behold: Seams and darts were sewn!

Productive day really: I actually managed to sew the first darts in the fore part, the back seam (Which I basted together in Part 10 and the fore arm seams were sewn too.

If you look at the middle piece of cloth, you see some wrinkles on both sides, this is where I tried to shape the cloth a bit, so the shoulder blades get some space... As I've never done that before - modelling cloth with an iron and water - I'm not too happy with the results yet. I'll need to practice that a bit more! 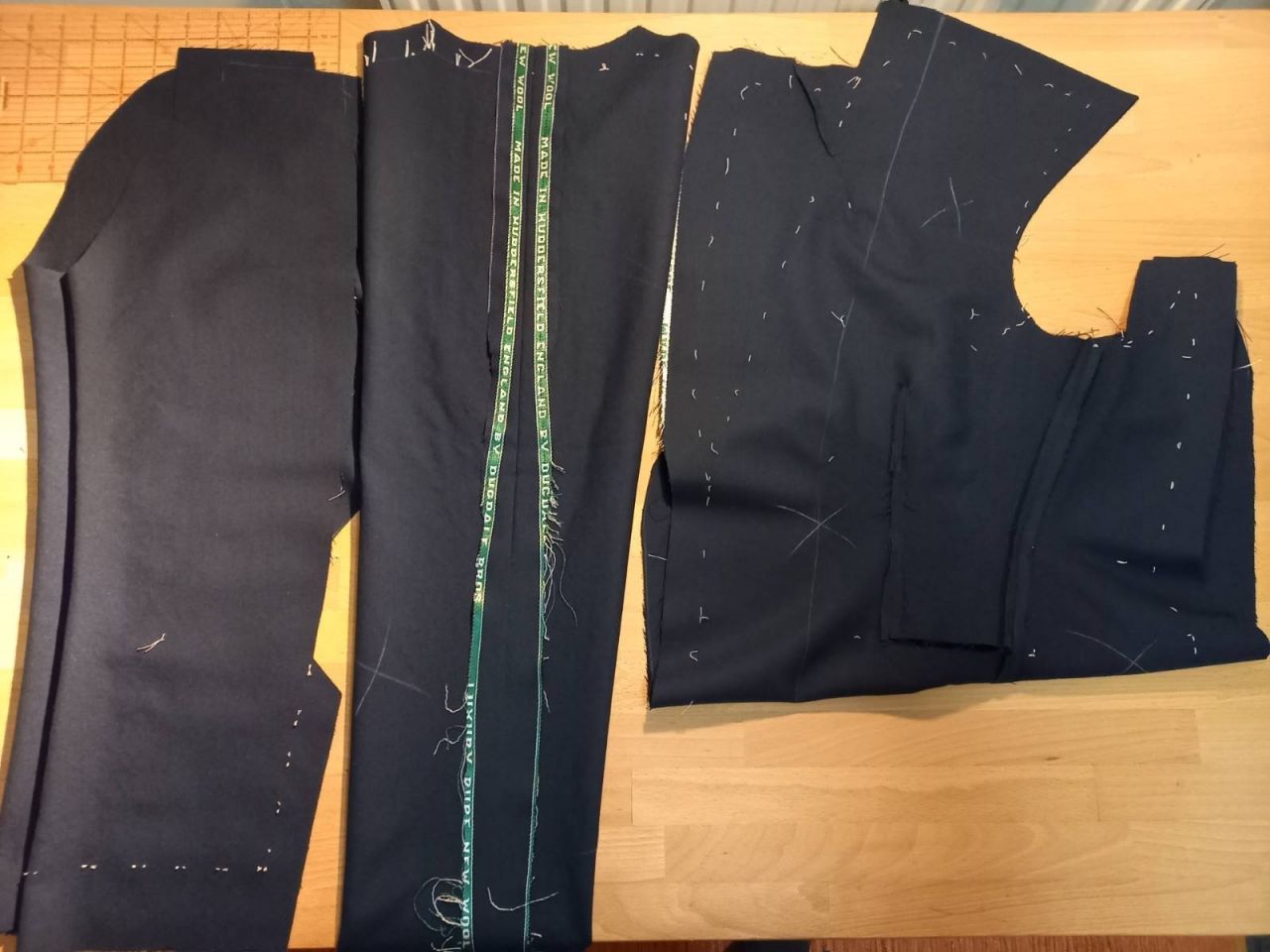 Bespoke - The making of a Savile Row coat - Part 10

Well, just because I couldn't finish my canvasses, that doesn't mean I couldn't do something else! In this case: Mark stitching. Which is done, to transfer marks and lines from the top cloth to the layer of cloth beneath it.

I'll be a lazy bugger and just quote the master, Rory Duffy, here: "Mark stitching may have many names such as thread marking or tailor’s tacks. It has only one purpose and that is to transfer the pattern to both sides of the cloth. It is used to indicate a seam run which has inlay adjacent to it so the maker knows where the seam finishes and the inlay starts. It is also used to transfer points such as the neck and shoulder points, balance lines and pocket positions. Great care should be taken when adding the mark stitches so that the pattern is followed closely when the garment is being assembled. Indeed the coat maker can greatly alter the fit of a garment if they fail to include the appropriate mark stitches." 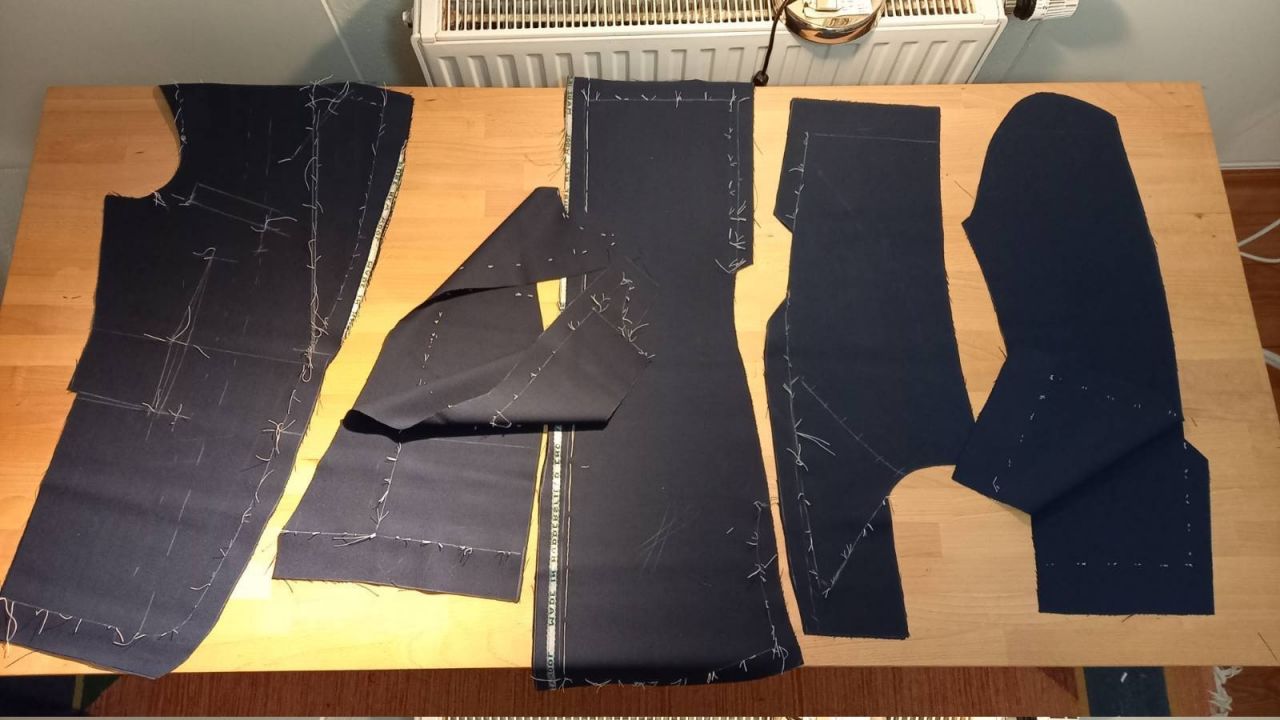 Fun job to do! Especially since it gave me the chance to practice using short needles and a thimble.

If you look closely at the middle part, right next to the "Huddersfield" ribbon (mirrored writing), you'll see rather long stitches - roughly 1,5 to 2 inches each. A great moment: This is the very, very first seam basted by me - it (temporarily) connects the two back part halves at the center back seam!

Bespoke - The making of a Savile Row coat - Part 9ish - to be continued!

So, I did end the coat fixing: Lining, sleeve lining etc. etc. ... it's all there. Didn't make any photos of that.

After that, it was time to cut the canvas. You might not know this, but for a bespoke coat, a lot of different fabrics are used, apart from the cloth itself, that is. These are samples of the fabrics I've used until now: 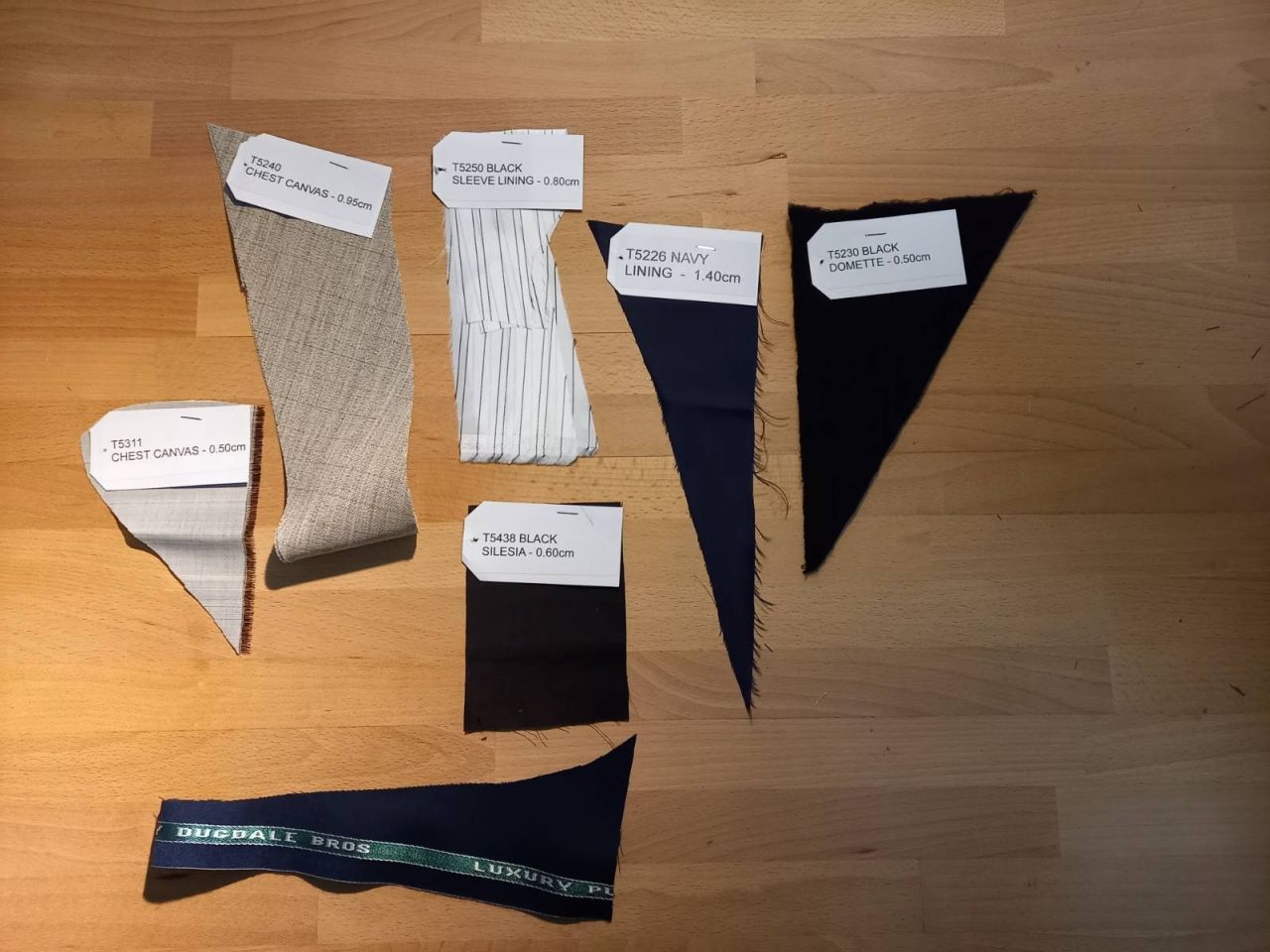 Both canvasses are used for the front. The small piece on the left will be used to stabilize the breast region, the bigger part next to it is supposed to cover the biggest part of the fronts. The "silesia" is a cotton fabric, used for pockets. On the right, you'll see a piece of domette, which is a very soft, woolly kind of fabric, which will also be used in the breast areas to pad those.

But alas: This is where I messed up. I cut the chest canvas in the wrong direction - I should have turned it 90° before cutting it.* As you can see, it is now too short to cover the full length if the fore part: 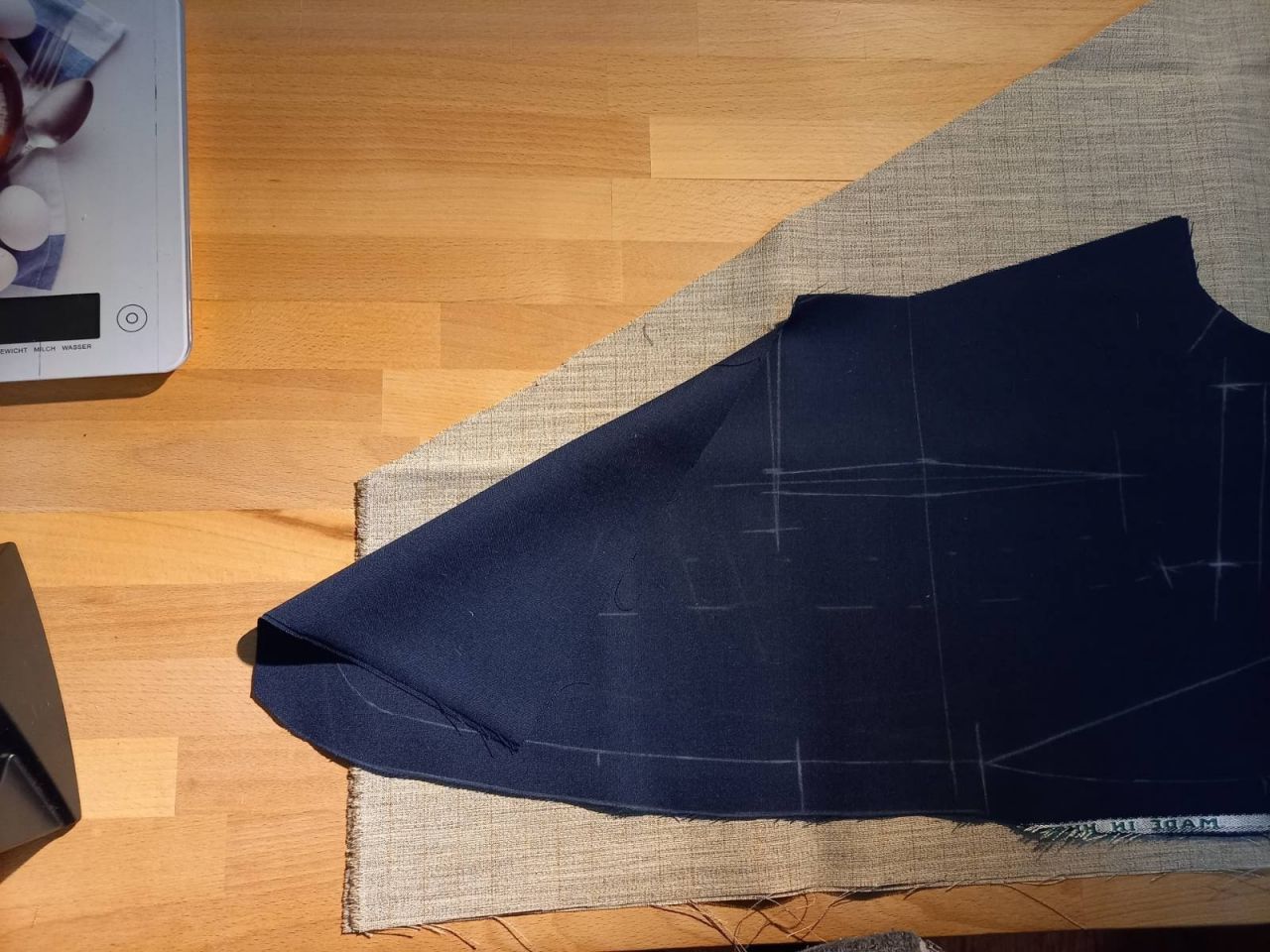 *Why? Because I need the stiffness of this canvas to work vertically - so it becomes "stand". The way I cut it, the lapels would not roll the way they should and the whole front would "collapse", as there would be no real support in there.

Ah well, I already ordered some new chest canvas with a shop in Bavaria - let's see if it will fit in, then I can cut those two pieces correctly.